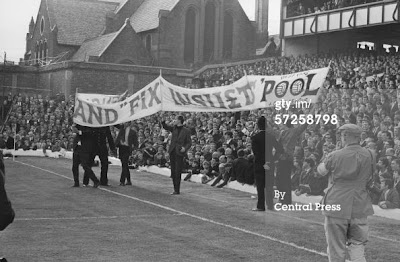 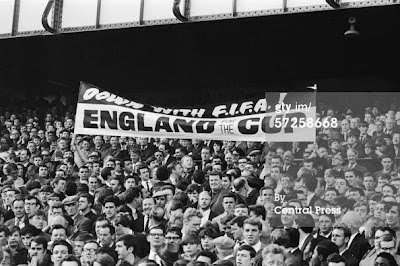 Doing some research recently, we came across these two pics. The first thought was that nothings changed as money comes first for organisers and the fans are the last people taken into consideration.
The '£' sign in the word 'insult' verifies the fact that F.I.F.A. rescinded on a deal that stated if England progressed to the 1966 World Cup Semi-Final the game would be played at Goodison Park on Merseyside.
Goodison had a capacity of 62000 at the time while Wembley held up to 98000 therefore generating more cash. Could this have been the start of a Merseyside/South divide that does not see many fans from the area getting overly excited by England fixtures. The expense of a 400 mile round trip plus an overnight stay to see the National side would be a great expense for many working class supporters.
The banners were taken to the other Semi-Final which was held at Goodison Park between West Germany and the Soviet Union.
Posted by Eighties at 04:43