AMF ON THE CONTINENT 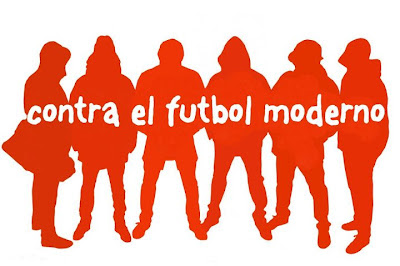 The Against Modern Football movement has a large appeal across the Continent with the plight of our game being highlighted by protests, banners and T-Shirts. Unless a stand is taken, then no big corporation or the F.A. or U.E.F.A will listen. Just spreading the word whether that be by handing out leaflets, marching, protesting at the ground or even wearing a T-Shirt could have an effect.
Our own assault takes on an international theme as we use the brilliant graphic posters designed by the student group Atelier Populaire from the 1968 uprising in Paris as our inspiration for the latest AMF design.
The original poster takes on a Casual theme with a collection of silhouette images taken from the last 10 years of 80s Casuals designs. We have some international stockists who may want their native language for the central tag-line but we will use the French wording for the U.K. as it ties in nicely with the Inspirational Posters.
A Spanish version in shown to highlight the problems in Spain as seen in the accompanying video.
The T-Shirts are due an August release.
We have two more International designs in the pipe-line.