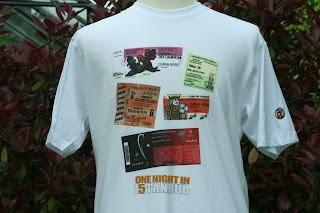 5 Years ago this week was probably one of the greatest Finals in the history of the European Cup/Champions League. 3-0 down at half time to A.C. Milan, Liverpool were dead and buried. Consolidation was the operative word. Anyway the story has been told a thousand times and the outcome as we all know meant Liverpool taking the European Cup home for keeps having won it on 5 occasions. The game left an indelible mark on many and I don't necessarily mean the tattoo of a Liver Bird on every Liverpool supporters chest. The emotions that poured out that night gave inspiration to many. Numerous books followed, a mini film "15 minutes that shook the World"  and at least two plays that we know of
"Beating Berlusconi" and "One Night in Istanbul".
The Nicky Allt play "One Night in Istanbul" debuted last year at the Empire in Liverpool and this year has a two week stint before moving on to Dublin.
80s Casuals are proud to have been asked to supply our unique 5 ticket T-Shirt as merchandise for the Play. Depicting the 5 tickets issued for the 5 winning finals, the T-Shirt was first available two days after that eventful day. The play itself actually has one of the actors in a 4 ticket T-Shirt designed prior to the Final.
Posted by Eighties at 09:48