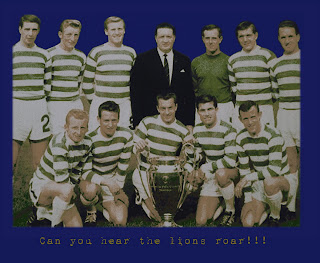 Every now and again we get asked by some stockists if we can do a special one of design for a local club. There aren't many clubs in the world as big as Celtic, so we were only too willing to commemorate the first British club to win the European Cup. The pic shows the 1967 winning team with the saying "can you hear the lions roar!!!" a nickname given to the team after the Lisbon Lions triumph in Portugal. All players in the squad were born within 30 miles of Glasgow, an achievement which is inconceivable in todays age of foreign players.
Posted by Eighties at 09:10