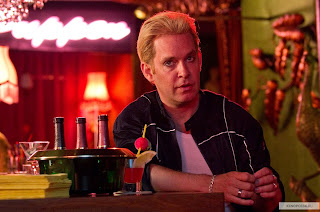 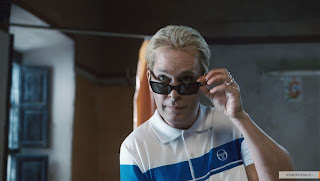 Director Joe Wright's latest film is Hanna. The tale of a 16 year old trained by her father to be the perfect assassin. When Hanna is despatched across Europe on a mission, she is tracked by a ruthless intelligence agent and her operatives. These operatives are attired in yellow and navy Fila Terrindas with an added Tacchini Polo T-Shirt thrown in for good measure.
The Director appears to be releasing some sort of pent-up emotion in his choice of 80s Casual clothing as he says in a recent interview "Tom Hollander's character is a kind of revenge on the Casual kids who used to beat me up at school. They all wore Tacchini tracksuits, so I thought I'd put Tom in a Tacchini tracksuit, lip gloss, and have him beaten up by a girl! It felt quite cathartic!"
The film has been getting decent reviews and has a soundtrack by the Chemical Brothers. It is in cinemas now and is in the top 5 films this week.
Posted by Eighties at 00:17