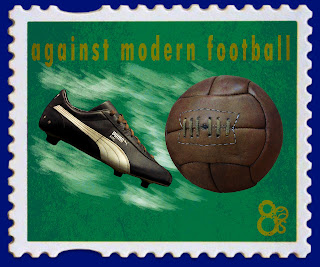 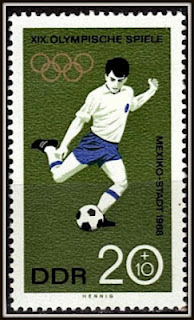 Here we have the second design in our 'Against Modern Football' range of T-Shirts.
The T-Shirt depicts a vintage stamp with the iconic Puma 'King' Football Boot and a 1970s orange Football or 'Casey' as they were known. Both were on every kids wish list for birthdays or Christmas, but in those days they would last until they were worn out. Not like todays big business, commercialized football world were fluorescent, iridescent, coloured football boots are released every other week.
The kids today get sucked in and want new boots before they have even grown out of the previous months latest release.
The stamp reminds us of some wonderful football stamps from around the World, that would be released whenever there was a World Cup or Olympics.
This new design will be available from early May.
The AMF T-Shirt has been re-printed and is due to be re-stocked in the coming week.
Posted by Eighties at 15:37