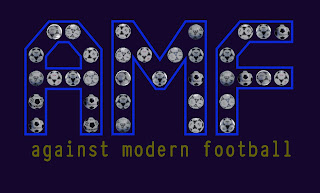 It appears that the 'Against Modern Football' slogan resonates with a lot of fans. The A.M.F. design is going to be re-printed after a day of heavy sales. We are re-doing the Orange outline as well as a new Royal Blue one this time along with a few extra colours in the T-Shirt. Stock should be available in two weeks. In the meantime our Stockists including Ran, Trend, Distant Echo, 80s CasualClassics and An-X have supplies from today.
The slogan has been around for a while now and small campaigns have been building across Europe in places such as Sweden, Italy and Germany. We believe the average supporter needs more of a say in Football related matters.  Commercialism has taken over the beautiful game, but its not just the commercialism, it's things like Tradition. For instance, goal-line technology. Will the Fans be asked if they want it or will we just be told? It's the changing of a Stadiums name, Foreign owners bleeding clubs dry, soulless stadiums, the F.A. Cup Final being on the same day as League games, the European Cup Final moving to a Saturday, iridescent purple football boots, yellow footballs,  the list is endless.
Don't just accept the killing of our game, make your voice heard if you have the opportunity.
Posted by Eighties at 05:03