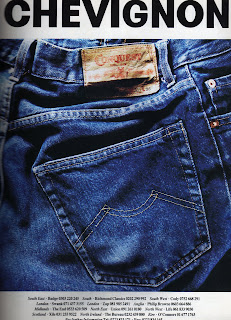 An 80s favourite that conjures up nostalgia is heading back to these shores for A/W11.
Classic French brand Chevignon started in 1979 inspired by vintage U.S. outerwear. By 1984 the off-shoot Togs Unlimited had launched with the inspiration coming from Robert De Niro's Deer Hunter character. The labels Jackets and Sweatshirts became immortalised in The 90s due to its exposure in the Face magazine.
Chevignon re-launched the Togs Unlimited brand in 2010 with a range of Jackets sold exclusively in the Colette store of Paris and now the label is ready to launch once more with a nicely edited selection of garments. More details to follow soon.
The ad comes from the Autumn/Winter 1993 Arena magazine.
Posted by Eighties at 14:07