MADE IN GERMANY 'ADIDAS MUNCHEN' 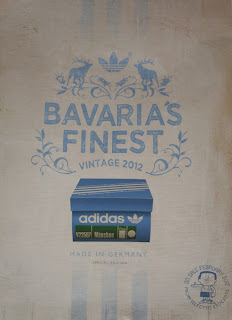 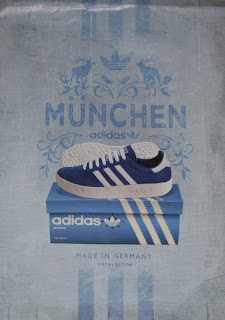 It's been a while since we have seen such an advert as this from adidas. Yes, 'Made in Germany' it proclaims. It was during the mid 80s that adidas de-camped production from European countries such as West Germany, France and Yugoslavia to start afresh in the cheaper manufacturing places of China and the Far East. So now it is those made in Europe trainers that are held in such high esteem, with ebay prices reflecting the kudos in which owning a pair is held.
The Munchen are very limited and only available from selected stockists in February 2012. The price you pay for owning such a prestigious pair? around £225. but remember for that there will be no need to jump the train to Germany for such exclusivity.
The advert comes from the new book 'The End' which should be available in the next two weeks.
Posted by Eighties at 14:35