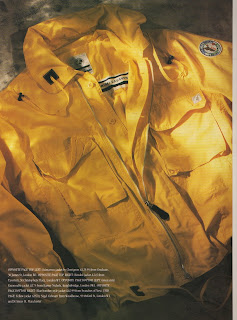 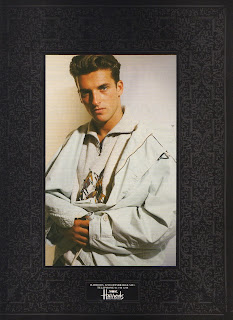 Nigel Cabourn has been enjoying his time in the spotlight over the last few years especially with the recent re-issue of the cameraman jacket from his 2003 Authentic line. The original inspiration for the Authentic Line being Sir Edmund Hillary and the 1953 Ascent of Everest. The 2003 collection being produced to coincide with the 50th Anniversary of the climb. Those of us who are old enough will remember the designer from the mid to late 80s. The early 70s had seen Nigel take his first steps into the fashion world whilst still in his final year at college. The Cricket Clothing label had a turn-over of £100000 but he decided to set off globe trotting. On his return the label started up again before a demise due to under capitalisation.
Cabourn therefore went freelance and began picking up accolades for work with Woodhouse and produced a Next blouson jacket which flew off the shelves.
On getting a backer in 1985 the Cabourn label was up and running.
Above we have a Summer yellow jacket from Spring/Summer 1987 available at Woodhouse in Manchester and London for £95. Also from Harrods a Winter '87 Ventile jacket. Ventile seems to be one of Nigel's favourite fabrics having been developed in the U.K. for the R.A.F. in 1943. The material gave pilots crash landing into the sea up to 20 minutes survival time compared to only minutes with other materials.
Posted by Eighties at 13:53