AD of the WEEK 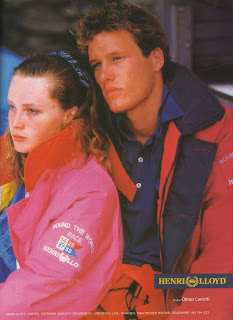 Taken from the ARENA magazine dated Autumn/Winter 1987 the ad shows a couple of CONSORT ORIGINAL jackets from their Winter range. Interestingly the designs are credited to Italian OLMES CARRETTI. Olmes designed for HENRI LLOYD during the 1986-1991 period in which time the HENRI LLOYD CONSORT ORIGINAL sailing jacket became an adopted item of the Italian Paninaro. The jacket was his re-interpretation of the one designed for Sir Francis  Chichesters single handed sail-boat trip around the world. Olmes Carretti is also probably best remembered as the designer behind Iconic sweatshirt label BEST COMPANY from 1982-1992.
Posted by Eighties at 10:13