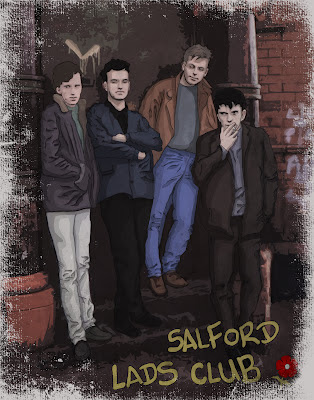 30 Years on from The Smiths formation in Manchester, we still await them to re-form to give those unable to see them in the 80s the chance to see why critics hail them as one of the most important bands to emerge from the Independent music scene.
As a 30th celebration we bring you the Salford Lads Club as a homage to Stephen Wright's iconic photograph from the inside sleeve of 'The Queen is Dead' Album. That photo now has pride of place in the National Portrait Gallery.
We have used a young graphic designer whose work caught our eye in a Stockists Store. Paul has his own label called Art of War and some of his work is available from Ran in Liverpool and Manchester plus from his own website http://www.artofwarclothing.com/default.aspx
The Salford Lads Club T-Shirt should be in Stores by early May.