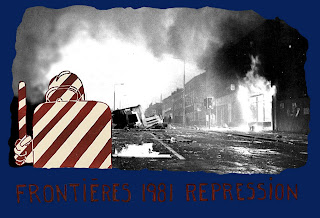 This year marks the 30th anniversary of the 1981 Summer riots. A period of discontent against the police and authority plus tensions generated through inner-city deprivation and un-employment. The T-Shirt depicts a typical scene across the major cities of Britain at the time and incorporates an anonymous piece of art from the student riots in Paris of 1968. The French riot police were heavy handed in their onslaught against students and the poster was one of many to appear on walls across the city. The provocative work was used to promote awareness and action. The riots gave rise to sweeping social change and both the images we have used continue to resonate in our times.
The T-Shirt should be available towards the end of May.
Posted by Eighties at 11:30