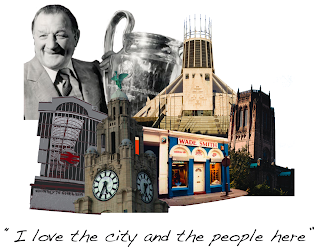 Bob Paisley is arguably the greatest manager of all time.
In his 9 seasons in charge of Liverpool F.C. He won 6 Championship titles, 3 European Cups, a UEFA Cup as well as 3 League Cups in a row and was named Manager of the Year in 6 of his 9 seasons in charge from 1974 to 1983.
We honour 'a gentleman' with an artistic collage T-Shirt that encompasses Liverpool's two Cathedrals, the Liver Bird and two significant Casual points of interest from the early 80s. Lime Street station had the infamous graffiti "Ordinary to Chelsea" sprayed upon its entrance wall plus the Wade Smith shop which became a mecca for the trainer obsessed youth of the North West.
Bob himself appears with the European Cup which he won on three occasions during a period where travelling abroad certainly broadened the horizons of the youth of the day.
The tagline is one of many Paisley quotes from his time at Liverpool.
Posted by Eighties at 14:53