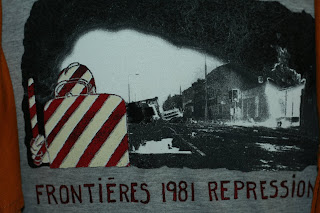 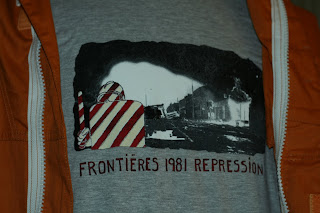 The '1981' Riots T-Shirt is a real exclusive and only available from our own website and Ran in Liverpool and Manchester plus Stuarts in London. 50 only have been produced this month. Our image incorporates a provocative French policeman image from a poster produced during the 1968 student riots in Paris plus a pic which shows a scene of devastation witnessed throughout the U.K. during the Summer of 1981. The T-Shirt will be distributed this week almost 30 years on, along with 3 other new designs which we will show once printed.
There are also re-runs of the popular Joy Division influenced 'Insight', plus 'The North will Rise' and the Everton F.C. Duncan Ferguson designs.
All T-Shirts will be in stores towards the end of the week.
Posted by Eighties at 04:23