ARENA AD of the WEEK 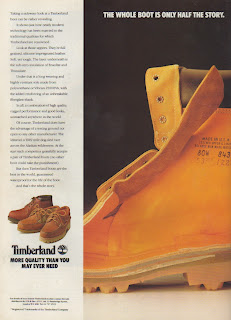 There's been a resurgence of interest in Timberland of late as the company has brought out an Abington range of boots. This was the original name of the brand until they named a shoe Timberland in 1973 and it became so popular they changed the company's name to it.
Timberland produced the first waterproof boots in the 60s by fusing the leather uppers to the sole without stitching.
The Arena ad comes from the late 80s and the added interest in it is the detailing that is put into the boots from the insulation of Ensolite and Thinsulate to the Vibram sole.
Posted by Eighties at 16:09